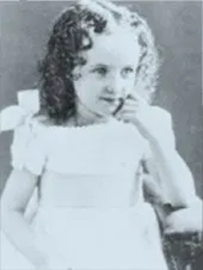 1866 - Mary Virginia Merrick was born on November 2
1878 - Mary received her First Holy Communion and pledged to "serve Our Lord in the poor" at the
age of 12.
1880 - At the age of 14, Mary had a fall and her life of physical suffering began.
1883 - At the age of 17, Mary was treated for what is believed to have been Potts Disease (extra
pulmonary Tuberculosis), which
slowly paralyzed areas of her spine and legs.
1884 - Both of Mary's parents died and Mary assumed responsibility for her family. Mary Virginia's
vision for her Christ Child Society was developing. The first layette was distributed to a
child born at Christmas. This was also the first Christmas giving when Christmas letters
written to the Christ Child were answered with gifts from Mary and her friends, all marked
"From the Christ Child." One of these gifts was a red wagon given to Paul, a young boy who
did errands for Mary Virginia.
1885 - Mary Virginia's vision of a society dedicated to the Christ Child gave her a personal renewal that "the world was again a
place of beauty and love."
1887 - The Christ Child Society was formally created in Washington, DC and Mary Virginia remained the president of the
Washington, DC Chapter until her death in 1955.
1890 - The Society distributed 390 garments, 12 layettes, and 250 Christmas letters were answered.
1891 - The start of the "Fresh Air" work began for children to spend two weeks in the country in rented cottages. The first appeal
for contributions was made and the wife of President Benjamin Harrison sent a generous check.
1893 - A Volunteer Visitors group was formed to go out into the community to investigate conditions in homes where layettes and
clothes were distributed to determine and tend to their additional needs.
1898 - There were 352 members who distributed 2,200 layettes, 300 Christmas gifts, and sent 30 children to the Fresh Air
summer program.
1899-1904 - Due to poor health, Mary Virginia allowed her faithful members to carry on the work of the Society and report to her
regularly of their progress serving the poor.
1900 - The Society's motto, "Laborare Est Orare" (To Work is to Pray) is adopted.
1901 - The first constitution is formally adopted and officers were elected.
1903 - The symbol adopted by the Society is the sacred image of the Christ Child raising His hand in benediction.
1904 - Five Centers are now in operation in Washington in rented houses in different sections of the city and were called
"Settlement Houses." Settlement work in the City of Washington, pioneered by the Christ Child Society, rapidly progressed
as the population increased.
1905 - Mary Virginia Merrick established The Christ Child Society as a national organization as "Branches," later called
"Chapters."
1906 - Classes in English for adults were established.
1907 - The first Christ Child "Boys Club" was established.
1908 - The first retreat for members was held and the custom of yearly retreats or days of recollection began.
Mary wrote a children's book, The Life of Christ. The library work grew and libraries were established in jails, Tuberculosis
hospitals, and a reform school in the city. The work of visiting the sick in hospitals began. 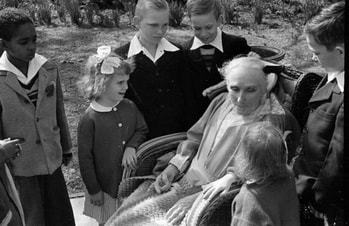 1911 - Seven Centers in Washington served 2,600 children a year.
1912-1914 - Pope Saint Pius X sends a letter of commendation to the
Christ Child Society.
1913-1922 - Mary Virginia wrote monthly "Aunt Kate Letters" for
the Leader, a Catholic publication.
1914 - A Junior Membership Group was formed to involved the children of
Society members. Lectures and seminars were offered.
There were 287 junior members and 1,000 members of the Washington
Chapter. Farmland was purchased in Silver Spring,
MD, for a new home for the Fresh Air Program. WWI was declared and
​            many Chapters turned to wartime services or
closed.
1915 - Mary Virginia wrote, "Come Unto Me: Prayers Before and After Communion" and "Margery Stories." She was awarded the
Laetare Medal by the University of Notre Dame in recognition of her distinguished service. The Society celebrates 25
years of service.
1916 - Society Chapters were incorporated into the the National Christ Society and officers were elected. Mary Virginia served as
the National President until poor health forced her to resign in 1948. Until her death in 1955, she served as "Honorary
National President." Free dental clinics were established in many of the Centers in Washington.
1918 - A Christ Child Society War Committee was established.
1920 - Mary Virginia wrote a book for children called, The Altar of God. It was an introduction to the meaning of the Mass.
1922 - The Christ Child Society assisted with the training for social workers at Catholic University. Rummage sales began being
organized to support the programs.
1923 - The first National Christ Child Society newsletter was printed.
1926 - A farm was purchased in Rockville, MD to use as a Fresh Air Farm.
1927 - A Convalescent Home was created from a converted from the Edson Lane Farm.
1932 - The Christ Child Society Branches are now serving in 33 cities. Mary Virginia was the first woman to receive
the Cosmopolitan Club of Washington's Medal as "Washington's Outstanding Citizen." 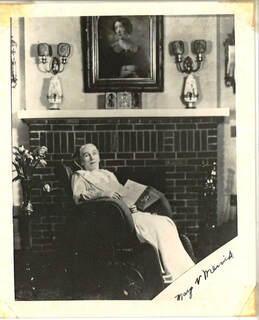 1937 - The Society celebrates 50 years of dedicated service to the physical needs and religious guidance of countless children and
youth. Mary Virginia was given a rare honor by Pope Pius XI: the Pro Ecclesia Et Pontifice Medal for her "labor in
exemplary fashion for the Catholic Church."
1938 - A camp in Maryland was purchased to establish the Merrick Boy's Camp. Property was purchased on the Chesapeake Bay to
establish the Merrick Girls' Camp.
1941 - The annual report states that there have been 159,740 participants who came "through the door."
1947-1948 - The annual report shows that 158,261 children and youth were served, 204 girls attended summer camp, and 1,923
received Christmas gifts.
1948 - Mary Virginia was given an honorary degree by Georgetown University. She was
also the recipient the Sienna Medal, an award given to Catholic Lay Women by
Sienna College in Memphis, TN. ​
​1953 - The name of Christ Child Convalescent Home was changed to Christ Child
Convalescent Hospital.
1955 - Mary Virginia died on Jan. 10 of a cerebral hemorrhage at the age of 88.
1959 - The first Junior Guild was established in Washington and called the "Mary Virginia
Merrick Guild."
1974 - The last remaining Settlement House was closed due to declining population
downtown and changes in the neighborhoods.
1987 - The Society celebrates 100 years of existence and establishes a scholarship at
Catholic University of America in the School of Social Work called the Christ
Child Scholars Program and the recipients each year are called "Mary Virginia
​            Merrick Scholars."
2003 - Mary Virginia Merrick was declared a "Servant of God" by the Church.
2002 - The first National Office is opened in space in the Washington Chapter's Offices.
2011 - The Cause of Beatification and Canonization of the Servant of God, Mary Virginia Merrick, was opened by Cardinal
Donald Wuerl.
2012 - The Christ Child Society celebrates 125 years of service to children in the name of the Christ Child.
2016 - 22,000 layettes were given out.
2017 - There are 46 Chapters through the United States where 82,000 children have been served. Christ Child Society members
have contributed 385,000 service hours. ​